The Day the Shorties Got Totally Hosed

Cleopatra: An awesome exhibit at the Franklin Institute that we did NOT see today.

Today the plan was to go to the Franklin Institute this morning while Husband was out playing Old Man Soccer.  We were excited (especially Pumpkin Pie) and gradually getting ready, but Sweet Pea’s ADHD symptoms were off. the. charts.  He was getting into trouble left and right playing overly rough with Pumpkin Pie, dismantling the couch, annoying Pickles to the extent that he locked himself in his room and that was all in about 20 minutes.  He also had homework to do today.  He did half yesterday, the sentences with his 17 vocabulary words.  But when I looked at it, it looked like Pumpkin Pie (or Doodle Dog) had done it and it had to be totally re-done.  There was NO WAY he was going to be able to spend the morning out and then come home and do all of his homework, plus, the Franklin Institute would kick us out if I brought him there in this kind of shape, so we had to plan-change.

Step One:  Get Sweet Pea’s vocab done. Unfortunately, this involved me sitting with him one-on-one and making sure that he was writing legibly and making sensible sentences.  Pickles, meanwhile was holed up in his room reading and Pumpkin Pie was playing with his blue robot, attacking us intermittently.  Sweet Pea is a terrible speller, and we were in hysterics when he wrote about the how desolate it looked outside last wienter.  We couldn’t stop with the What do you call it when it’s cold outside and dauchshunds fall from the sky?  Weinter.  What do you call it when you eat hot dogs in December?  Weinter! I know, right?!

Step 2:  Figure out something fun to do. I had 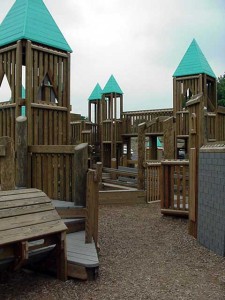 promised Franklin Institute, but with the travel into the city and the fact that we had to leave at 12 something for Pickles to go to swimming, that wasn’t happening.  I suggested the dog park, but that was a no-go.  They went to MacMillan’s (the most delicious, enormous doughnuts on the planet) yesterday, so that was off the table, too.  Finally Sweet Pea suggested the Castle Park (awesome wooden playground with lots of hidey-holes and opportunities to stage battles) and the Brothers were like, Giddyup!  And I was like, Giddyup… yawn.

Step Three:  Get out of the chair. At this point I had been sitting with Sweet Pea for nearly an hour trying to keep up the enthusiasm and energy level required to keep him writing vocab sentences and I was slightly sluggish.  What I needed was a buddy and a little latte.  I texted awesome neighbor Gwen to see if she and 8 year-old Duncan were up for a little Castle Park.  The brothers were already in the van waiting for me, but they were okay with waiting for another few minutes if it meant they would have Duncan along, too.  Sadly, it was not meant to be.  Gwen and Duncan were out and we were on our own.

Looking up Eggnog Latte on Starbucks.com, I saw the calories and fat. I am never having one again.

Step 4:  Get coffee. We headed out and I purposely did NOT go to Starbucks because it would have been totally out of the way and we were burning daylight.  On the way to the park I consult Maggie (our GPS with the British accent) and she kindly informed me that there is a Starbucks on the very same road as the park a mere fraction of a mile away!  I headed that way, but Maggie is a little senile and led me astray enough to require 2 u-turns to get to my egg nog latte. No drive-through, but I ran inside and waited in a ridiculous line and paid $4 (Worth it, btw).  The parking lot was one of those designed by someone without much driving experience and took forever to get out and onto the actual road.  Brothers remained impossibly patient, but realized that we wouldn’t have as much time as we thought to play.

This is what the park looked like when we got there. Imagine the "Park Closed" sign. Brought to you by the Redundancy Department of Redundancy.

street and turned into the parking lot that leads to the playground.  We wound our way around and when the fence came into sight all that was there was… a fence.  Whuck?  Where’s the park?  Where’s the big wooden castle-style playground we have been going to since Sweet Pea was 2?  What is going on?  Am I in the right parking lot?  Yes.  Crap.  It looked like a giant hand from above reached down and pulled the park out of the ground and took it away!  We were all in shock to varying levels, and Pumpkin Pie was crying.  Sweet Pea insisted we drive over to see the sign posted by the fence.  It read (and I am not joking):  Park Closed. Seriously?  We had no idea.  Sweet Pea said, “We got hosed”.  Sweet Pea, I couldn’t have said it better myself.

I am a stay at home mom who now and again sneaks away to be an in-home family therapist. My husband and I have 3 boys: Sweet Pea (12), Pickles (9) and Pumpkin Pie (4). Oh yeah. We have Doodle Dog, too. You guessed it! He’s a boy. At least he pees outside.
View all posts by Adventures From Cloud 8 →
This entry was posted in ADHD, Funny Parenting Blog, Parenting Boys, Pickles, Playgrounds, Pumpkin Pie, Sweet Pea. Bookmark the permalink.