Most holidays, we members of Cloud 8 pack up our rockin minivan and head to Camp Mamaw (Husband’s parents’ place).  This Thanksgiving was no exception.  Mamaw and Dat rock and are lots of fun to visit.  Plus, there are lots of fun things to do at Camp Mamaw that we can’t do at home.

I can tell you with certainty that there is nothing more satisfying for any one of my children than to catch a brother unawares and blast him with a Nerf dart. You can imagine how proud I am.

First of all, there is a full Nerf armory in the basement.  Nerf shotgun, Nerf sniper rifle, Nerf pocket-sized guns are just the ones I know about.  There are only 2 rules for the Nerf gun battles.  #1:  They stay in the basement or outside.  Always.  The rest of the house is a DMZ (De-Militarized Zone).  Rule #2:  There is to be no  arguing/fighting/bickering over the guns.  If either of the rules are broken, the guns go in the attic for the rest of the trip.  It works pretty well.  My boys got their 2 year-old cousin, Munchkin into the gun play.  Every parent’s dream, when some obnoxious older kids show their formerly sweet, young child the joy of shooting stuff. Sorry Unca and Aunt Mo!

At Mamaw and Dat’s house, they have a very steep driveway that goes from the street down the side of the house around to the garage at the back of the house.  Which leads us to the other fantastic thing the Brothers get to do at Camp Mamaw.  They get to ride down the steep driveway on Big Wheels into a huge leaf pile!  I know, awesome!

There are 2 identical big wheels, and they have

Hop on and take the thrill ride of your life. Get your helmet first, and I don't care what it does to your hair.

adjustable seats.  The seats have 3 settings.  On one of the bikes the seat was set on the closest setting and on the other it was set on the farthest setting.  Being the larger person, Sweet Pea chose the Big Wheel that was the most comfortable for him, which was the one with the seat set all the way back.  This, of course, left Pickles riding his bike with his knees under his chin.

Sweet Pea pulled his Big Wheel to the top of the driveway and had his run.  He zoomed down the driveway, off the end, down the path and landed in the leaf pile, just as planned.  Pickles dragged his bike with the poorly adjusted seat up to the top to give it a whirl.  He got about a third of the way down and his knees folded under his bike causing a spin out and fantastic crash into the leaves off the side of the driveway leaving Pickles uninjured, but LIVID.  His face was absolutely purple with fury.  Little bits of spittle were forming in the corners of his mouth as he screamed:

Pickles (screaming):  SWEET PEA!!  THIS is why I didn’t want to use this bike!!  Look what happened to me!!

Sweet Pea: Yeah, but if I had used that bike, it would have happened to me.

Luckily Sweet Pea was far enough away that Pickles couldn’t reach his throat or he may have throttled him.  Can’t say I would have blamed him.  But as it was a holiday trip, it was really best to avoid bloodshed.

It was at this point that I fixed the seat for Pickles so he could have a decent ride, which he did.  I then had a parenting realization.  These children, MY children that I carried for a looooong time and delivered forth to the world with extensive pain and cursing.  These children were careening down a tree-lined asphalt driveway into the woods (more trees) at a frightening speed WITHOUT HELMETS!  Oh, dear Lord, what was I thinking?  Do I like the shape of their heads and the fact that they have the power of speech?  Do I like that they will one day leave the nest and go to college all while having control over their bowels?  Why, Yes!  I do!  Because those are all qualities that could be lost if they were to suffer a traumatic brain injury ramming to a tree or the blacktop or one of the parked cars if they lost control of the crappy plastic Big Wheels.  If we had been at home, there would have been no question about helmets.  They wear them for anything and everything that has wheels.  So, I ruined their lives and stopped all the fun.  Again.

The Big Brothers went inside to sulk and then cheered themselves up with a little Nerf violence against Pumpkin Pie.  That’s the spirit, guys!  When life gives you lemons and all that, right? 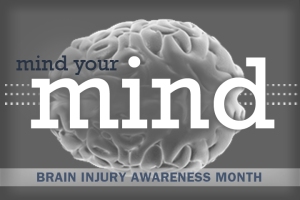 In all seriousness, people, wear your helmets. Your hair will look better if you don't have to comb it over a huge scar.

Lucky for us, as it turned out, Camp Mamaw happens to have a couple of loaner helmets, so the fun resumed later that day.  Even Pumpkin Pie joined in on the high-speed terror.  They took turns shooting the Nerf guns while the others rode down the hill.  I highly recommend it.  At someone else’s house, of course.  With helmets.

Leave a Reply to Adventures From Cloud 8 Cancel reply